Volunteering on a Farm in San Juan, Argentina

Back on the luxurious busses of Argentina, we decide to scrap the reclining chair champagne and hot meal, and downgraded to a normal chair and cheese sandwich.

Being tight is treating us well so far, at this rate I'm pretty sure we still have enough money to stay forever??

Pulling into San Juan, we quickly realised NO one spoke English. Now, no one spoke English in Mendoza, but really NO ONE speaks it here. Luckily, I had some how awoken with a new skill. The ability to understand Spanish?

! I have no idea where it came from (maybe the cheese sandwich) but miraculously I could understand what the locals were babbling on about.

Not so fortunately I only knew how to say one word in Spanish 'si', so I would rapidly nod my head when the taxi driver took off on one of his rapid speeches and answer every pause with 'si'. It seemed to work and eventually got us to our destination, after some very confused ' how the hell' s' from Ryan. I smoothly brushed off my new amazing talent, explaining it must be because I knew little bit of French (a little meaning none) and lapped up his praise.

We rolled up into Granja Tia Nora, the farm we are volunteering at, and are greeted by Pedro, our new boss. Along with his 2 dogs and a puppy he takes us straight on a tour of the farm. Goats,pigs,piglets,rabbits,Turkey's,chickens,cockrels,peacocks,kittens,cats,horses,ducks,geese and even a turtle. All playing together, this place was beyond magical. Swooping up as many kittens as I could fit in my arms we went to meet the rest of the volunteers.

We had set up volunteering at the farm through Workaway just a few days before therefore had no expectations of the farm , but we defently weren't expecting 7 more volunteers.

Attention reverted form the array of animals, we met our new house mates; Tara and Samantha from Connecticut, Damien and Caroline from France, Thibbuet from Belgium and Brice and Matilda also form France. Along with Pedro and Lucia, the 11 of us made up our new farm family. 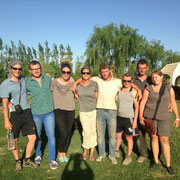 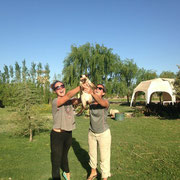 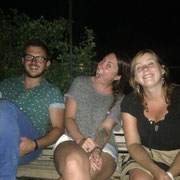 Days consisted of working 3 hours in the morning, taking a 3 hour ciesta (The Spanish' s greatest invention) working another 3 hours in the afternoon and then the whole evening off. Dinner times were spent crowded round a table passing round a variety of produce we had collected through out the day;freshly laid eggs,cows milk,salad and vegetables. All while battling the multi cultural, bilingual, Frenchies who would speak a million miles an hour in Spanish French or English translating Pedro's and Lucias conversations too us. Taking pitty on us non educated Brits they would teach us the Spanish necessity words such as; can you pass me the ice cream please. 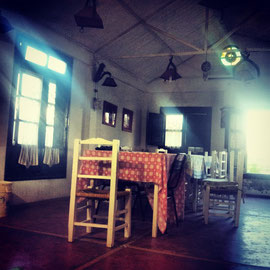 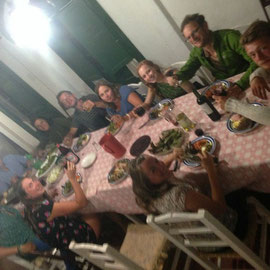 The daily routine of scrambling over the fence and tugging at a cows udders soon lost its novelty however.

Especially when she would decide to kick over and nearly full bucket or worse still, pee in it. There were perks though;I could skilfully aim one udder in the bucket, and the other at Ryan ankles. This provided much amusement at my end untill he learnt the trick too.

Filtering the milk minutes after it had come from the cow it was ready to drink. The freshest milk you could possibly taste..and gallons of it..an unlimited supply. Not only would we drink glasses of it we would make all kinds of milky deserts with it, and occasionally I would sneak some to the kittens 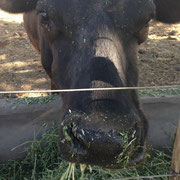 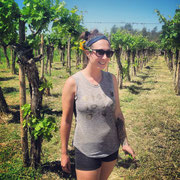 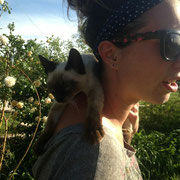 We spent HOURS weeding,watering and planting. The 35c Sun beeming on our backs,headphones in,we would whittle away the day planting every vegetable plant imaginable and picking what seemed like the whole of Argentina's weed population (not the illegal stuff mind)

The daily grind of picking weeds was broken up with our favourite activity of the day; feeding the animals. This was no easy task, you were more likely to get harmed in the process than not. Pigs would scramble over you, goats would mantle you, chickens pecking you, Turkey's chasing you..not to mention the escapees you would run around trying to catch. Never the less it was so much fun. We quickly became good friends with a few, and not so good friends with others. Our firm favourites were the ducks. They were so happy to see us every morning, greeting us with their quacks and a few eggs. Waddling up to us as we sprayed them with water, we stood observing the male ducks strange techniques of attracting the females.

The rooster did not share our love. Upon entering the pen you were advised to pick up the ' wack the rooster stick' I would ignore this stick and just stay away from him while collecting the eggs from the chicken. Ryan on the other hand would go in fully armed and confident, that was un till one day the rooster came for him at full pelt,pecking his knee drawing blood. After I scampered out of the pen into safety,I watched behind the bars, Ryan and the rooster having a full on match. Ryan won and came away fairly un harmed,but with a valuable lesson to never go in without the stick.

Granja Tia Nora was also an educational facility, schools would visit in the morning to see the delights of the farm, but mainly just to take photos off us 'Gringos' at work (a word the Argentinean people would used to describe white foreigners) they had us posing for all sorts photos

'The Gringos pointing in to the distance' etc.

Much to the younger kids amusement they would also find it hilarious to lock us in the pens while we were feeding the animals, therefore being chased around mainly by goats untill they would eventually unlock us.

The days went on, filled with sunshine,laughs,wine and a lot of ice cream (SO good that Ryan and I had decided this was in our top 3 favourite things about Argentina

Sunday was Asado day which was a family tradition similar to a roast but actually not at all. Basically you would eat as much meat as humanly possible and drink wine and get merry under the beaming Sun. Not much fun for a vegetarian as they believed meat should be served with a side of only meat, I would make up for it with wine or ice cream.

*** Are you a vegetarian visiting Argentina? Check out my guide to survival here****

Pedro would invite all his friends and family and we would do our best to communicate in our newly learnt Spanish. The adoring locals would dote on us never letting our glasses go dry and inviting us to live/work and play with them.

We took up an invitation one Sunday to attend a local football match. We had all heard about the crazy Argentinean football games so were all excited to see what we had in store. After a quick stop off at Pedro's friends house to get a few 'fernet' and cokes down us,we walked up to the stadium. Greeted by about 50 riot police we were sure to be in for a rowdy game. Frisked and in, we watched locals risk life and limb to show their support and put up their teams banner on the barbed wire. Like a professional trained gymnasts they would avoid the sharp points and rest their feet in the centimetre gaps in between. Entertaining enough to keep our attention untill the game started, even through the lack of supplies of alcohol. The game started and the chanting began,unfortunately so did a sand storm. Sheltering our eyes from the sand would make us miss the game,so we toughened up as our eyes filled. Half time and still no brawl or even a streaker. The police were still fully equipt on all corners of the pitch. Maybe the action started after half time? 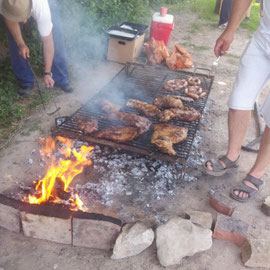 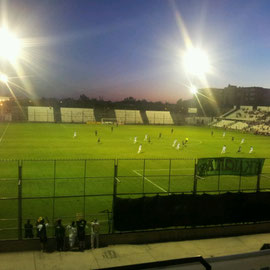 The game ended and the most violent behaviour was shouts of 'you're mum's a bitch' from a supporter every time the opposition got the ball. Not quite the rowdyness of the Argentinean games we had seen on YouTube.

Farm life became quieter and quieter as volunteers moved on to pastures new. Soon became time for us to leave, after 17 days we were becoming more farmer like and less human like and needed to have a good wash and get back on the road.

**If you would like more information about volunteering on Granja Tia Nora, please dont hesitate to contact me below**

Have any of you worked on a farm? How did you find it...